“Memento Mori” means to keep in mind that you will die.

2,000 years ago it was popular for Roman generals to keep this idea in mind.

As generals paraded around their cities in horse led chariots after victorious battles, they kept aides behind them to whisper into their ears, “Memento Mori.”

Generals knew the fleetingness of life and wanted to keep the reminder close by so that their egos didn’t get the best of them. It’s easy for our ego to inflate and make us believe we are bigger than death, especially after achieving success. So it is a humble reminder to remember your death. To remember that you, and everyone around you, is going to die. 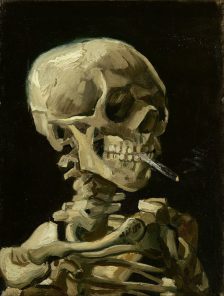 Many artists, philosophers, and rulers have used “Memento Mori” to inspire them.

Instead of letting the idea of death scare them, as many do, they used it to create urgency and a deeper perspective, seeing life as a gift and not as suffering.

Here are some famous names of the past who were inspired by the reminder of death, Memento Mori:

“Of all the footprints, that of the elephant is supreme. Similarly, of all mindfulness meditation, that on death is supreme.”
Buddha

“Every third thought shall be my grave.”
William Shakespeare

“Philosophy is “about nothing else but dying and being dead.”
Socrates

“People who are excited by posthumous fame forget that the people who remember them will soon die too. And those after them in turn. Until their memory, passes from one to another like a candle flame, gutters and goes out.”
Marcus Aurelius

“So this is how a thoughtful person should await death: not with indifference, not with impatience, not with disdain, but simply viewing it as one of the things that happens to us. Now you anticipate the child’s emergence from its mother’s womb; that’s how you should await the hour when your soul will emerge from its compartment.”
Marcus Aurelius

“Stop whatever you’re doing for a moment and ask yourself: Am I afraid of death because I won’t be able to do this anymore?”
Marcus Aurelius

The reminder of death still inspires many modern day entrepreneurs, artists, and others:

“There’s something coming for all of us. It’s called death. Rather than fearing it, it can become one of our greatest counselors. So, if this was the last week of your life, what would you cherish most? How would you live? How would you love? What truth would you tell today?”
Tony Robbins

“It’s easy to lose track of that mortality, to forget time, to think that you’re going to live forever. The idea that you’re gonna die and that life is short is only depressing if you’re thinking about it wrong. If you’re thinking about it right it should give you a sense of priority. It should even give you a sense of meaning; it should let you know what’s important, what you’re trying to do while you’re here on this planet.”
Ryan Holiday

“The reason I believe in it(death as motivation) is because it’s ultimately practical. It’s the guiding light and the fire and ambition that drives me toward legacy and living my best life.”
Gary Vaynerchuk

Will you look death in the face?

Are you ready to let death inspire you?

Do it and see how your life changes for the better…